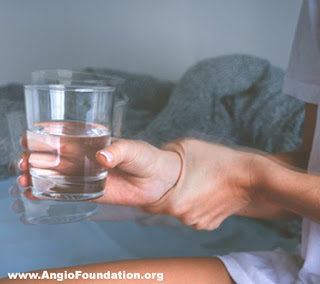 One of the most exciting opportunities in neuroscience research today is the use of strategies that protect the brain which may potentially prevent, delay or inhibit the progression of neurodegenerative diseases such as Alzheimer’s, Parkinson’s and ALS. This opportunity rests on our ability for early diagnosis. Research has shown that the likelihood of success for a given treatment-whether lifestyle changes or pharmacological approaches- is highly dependent upon early intervention, before the disease process has become too severe and potentially irreversible. Therefore, it is critical to understand the underlying biological changes that occur in the early stages of these diseases, along with the technology to detect them.
The notion that neurological diseases are preventable will evolve over time, as has already been seen in with a greater understanding of cardiovascular disease. The field of cardiology has become much more proactive in addressing cardiovascular health, where identifiable and modifiable risk factors can be assessed by clinicians and used to prevent or address heart and vascular disease earlier on in the process. This is directly applicable to neurological diseases, as there is a growing recognition that vascular factors play a critical role in brain health.

The brain is utterly dependent on a steady supply of oxygenated blood provided by an extensive network of arteries, arterioles, capillaries, venules, and veins. Any disruption of this highly organized system results in ischemic changes in the brain, resulting in injury and even death of cells critical to the brain’s function due to lack of oxygen. Emerging research has shed light on the idea that when these ischemic changes become chronic in key areas of the brain dealing with cognitive and motor function, they can lead to neurodegenerative changes associated with conditions like Alzheimer’s,  ALS and Parkinson’s disease. For example, a recent study conducted by researchers at the University of Manchester and reported in the Proceedings of the National academy of sciences( PNAS) demonstrated that a small version of amyloid has been found in the walls of small arteries in the brain, reducing blood flow in patients with Alzheimer’s disease.
These findings stress the importance of early diagnosis. Cardiology uses diagnostic studies to evaluate patients for reduced blood flow and ischemia in blood vessels that supply oxygen to the heart and other organs and tissues. But while the brain is often harder to assess, improvements in technology are making that easier. One of these advancements is in imaging the eye. It is worth noting that assessment of the optic nerve, retina and their surrounding blood vessels may provide a window into the vascular system of the brain.  The eye and the brain are connected by the optic nerve, and there are growing studies that suggest thinning of the retina reflects broader changes in the brain’s vascular system. 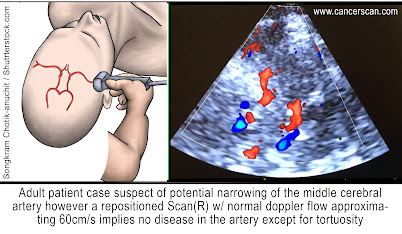 It is interesting to note that findings in optical coherence tomography studies have demonstrated retinal thinning in ALS and Alzheimer’s disease. While further studies are necessary to confirm these preliminary results, analysis of the blood vessels of the eye may provide a window into the health and functioning of the brain’s vascular system as an early diagnostic tool.
Another connection between eye health and brain health involves the potential link to a newly discovered region surrounding the brain and spinal cord called the glymphatic system. The glymphatic system is a network of small blood vessels embedded within the aqueous humor of the eye that connects to cerebrospinal fluid. The glymphatic system is responsible for the removal of disease-causing (or pathological) proteins that build up during the progression of neurodegenerative diseases, including amyloid in Alzheimer’s disease, alpha synuclein in Parkinson’s and TDP-43 in ALS. 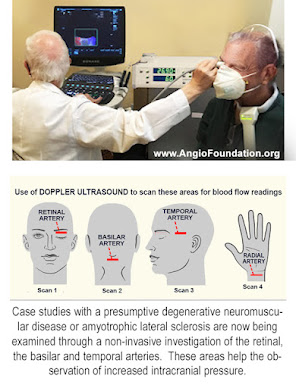 The glymphatic system connects the brain and the eye through cerebral spinal fluid, the fluid that surrounds the spinal cord and brain. Cerebral spinal fluid enters the optic nerve via the glymphatic pathway [1]. In turn, the glymphatic system is tasked to remove protein buildup that develops when degenerative changes occur in the eye, such as what happens with glaucoma. Support for this is found in studies of glaucoma where disturbances in the glymphatic system have recently been reported. [2] Another study shed light on the possible connection between the eye and the brain. B-amyloid (Aβ), the pathological protein associated with Alzheimer’s disease, was shown to be cleared from the retina through a glymphatic pathway that might also be impaired in glaucoma. [3]
All of this requires a healthy vascular system. The glymphatic function depends upon a normally functioning vascular system with good blood flow for the removal of pathological proteins. Ultrasound has long been used to assess vascular health and blood flow in vessels in many areas of the body, including in the brain. In patients with Alzheimer’s disease, studies using transcranial Doppler (TCD) have revealed abnormalities in the health of blood vessels in the brain that impede blood flow and may affect removal of these proteins. These vascular abnormalities are likely resulting in reduced drainage of pathological proteins like amyloid from the brain due to their effects on the glymphatic circulation [4]
Transcranial doppler is a technology currently in use that may offer the opportunity for earlier diagnosis as well as ongoing assessment of interventions for neurodegenerative diseases like Alzheimer’s and ALS.
1) Invest Ophthalmol Vis Sci 2017;58:4784-91
2) Neural Regen Res. 2022 May; 17(5): 937–947.
3) Sci Transl Med. 2020 Mar 25; 12(536): eaaw3210.
4) Neuropsychiatr Dis Treat. 2019; 15: 3487–3499.

This case subject with a presumptive degenerative neuromuscular disease or amyotrophic lateral sclerosis.  In a non-invasive investigation, we look at the eye for increased intracranial pressure, which may reflect in changes in the optic nerve diameter.  [Fig. 1] The right eye, which is the left slide, shows the optic nerve diameter of five millimeters. And the right is almost eight millimeters. So we have a guide as to where the brain disease is more severe. At this point, we activate the blood flow function and look at the right eye and see that the blood flow from the anterior cerebral artery circulation that supplies the back of the eye is approximately 60 per second in the blood flow which corresponds to the graph on the bottom.  [Fig. 2] On the left eye. The same blood vessel shows a decreased pressure of approximately 45 as shown by the decreased height of the blood flow graph at the bottom. Once again, we have measurable diagnostic technologies that are noninvasive, so we can follow treatment in diseases that are affecting the eye and as it relates to brain and degenerative neuromuscular disorders.

Now that radiologists are using Doppler blood flow to examine eye disease, including systemic diseases (including Diabetes, Brain tumors, heart disease, sickle cell disease etc) that affect the eye, we are hopeful that the ophthalmologic and neurological communities will start using this noninvasive technology as well to improve noninvasive and more rapid treatment of potential eye disorders, such as cancers of the eye, diabetes and glaucoma.  Another future use will be to correlate the effect of decreased vascular pulsation in the production of cerebrospinal fluid that is removed by the cleansing glymphatic system is postulated as a contributing factor in degenerative neuromuscular disease. 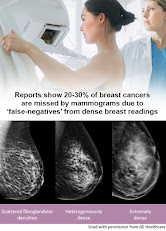 Mammography is the current standard for breast cancer early detection for women 40 & older. Recent studies have shown nearly half of all women who get mammograms are found to have dense breasts, exposing this population to the risk that mammograms may miss potentially cancerous tumors concealed by dense breast tissue.  Dr. Cutter's initial concepts to target LOW BMI (bet 12-22% body fat) was personally inspired.  As an active TRIATHLETE, her own diagnosis sparked her survey and inquiry throughout the athletic community where she uncovered a significant trend that became the basis for this research. She wishes to target younger women, athletes and members of underserved communities. "Younger women may be more likely to have dense breasts... also I find athletes with LOWER BMI (body mass index) or those with  less body fat are more likely to have more dense breast tissue compared with women who are obese." See full feature details  | 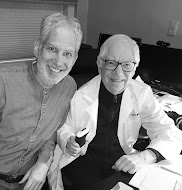 ABOUT THE DOCS:
In a recent clinical team effort between Dr. Robert Bard (cancer diagnostic imaging expert) and Dr. Jay Lombard, (an Integrative Neurologist), a multi-modal translational research program focused on the early detection and tracking of quantifiable biometrics of individuals suffering from neurodegenerative disorders.   Based on prior/conventional diagnostic methods,  Dr. Bard offers the integration of non-invasive innovations like the 3D Doppler Blood Flow Ultrasound imaging of the optic nerve and the Transcranial Doppler of the temporal artery to gather new and valuable data from the measurement of intercranial pressure and hemodynamics (vascular performance through blood flow readings) of the brain in various stages of the subject's condition.  New findings from this program are directed to the support of optimizing research strategies  leading to new treatment solutions.
(L) JAY LOMBARD, D.O. is a graduate of Nova Southeastern University of the Health Sciences where he received his Osteopathic Medical degree. He completed his  Neurology residency at  Long Island Jewish Medical and is the former chief of Neurology at Westchester Square Medical Center, Bronx Lebanon Hospital  and  adjunctive assistant clinical professor of Neurology. He is a published author of several peer reviewed articles on the pathogenesis of autism, Alzheimer's disease and autism. He has extensively lectured on the role of nutrition for the preservation of brain health and the importance of objective biomarkers for early detection of neurodegenerative diseases. He currently maintains a private practice in Valley Cottage, NY where he is primarily focused on Neurobehavioral and Neurodegenerative diseases.

(R) ROBERT L. BARD, MD paved the way for the study of various cancers both clinically and academically.  Dr. Bard co-founded the 9/11 CancerScan program to bring additional diagnostic support to all first responders from Ground Zero. His main practice in midtown, NYC (Bard Diagnostic Imaging- www.CancerScan.com) uses the latest in digital Imaging technology has been also used to help guide biopsies and in many cases, even replicate much of the same reports of a clinical invasive biopsy. His most recent program is dedicated to the reporting of mental health diagnostic and innovative solutions including the use of modern neuromagnetic technologies and protocols.

Disclaimer: The information (including, but not limited to text, graphics, images and other material) contained in this article is for informational purposes only. No material on this site is intended to be a substitute for professional medical advice or scientific claims. Furthermore, any/all contributors (both medical and non-medical) featured in this article are presenting only ANECDOTAL findings pertaining to the effects and performance of the products/technologies being reviewed - and are not offering clinical data or medical recommendations in any way. Always seek the advice of your physician or other qualified health care provider with any questions you may have regarding a medical condition or treatment and before undertaking a new health care regimen, never disregard professional medical advice or delay in seeking it because of something you read on this page, article, blog or website.
at June 22, 2022

Written by: Marilyn Abrahamson, MA,CCC-SLP - CBHC For some, Post-Covid brain fog can cause everyday cognitive tasks to be more difficult, ca... 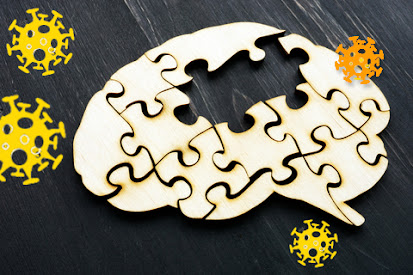 NYCRA NEWS
NYCRA NEWS is a free, all-volunteer public educational health news source produced by the NY Cancer Resource Alliance. Our contributors, publishers, (video) producers and editors unite to create and share current information related to health, wellness and the current state of our medical community at large. We collaborate with experts, researchers and health agencies to provide our readers with confirmed materials and resources to be shared throughout our network of partner foundations and cancer organizations.